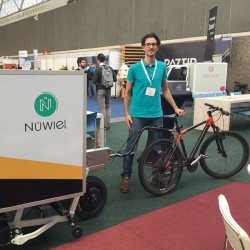 Nuwiel (Booth 100) – this year’s winner of the Postal Innovation Platform (PIP) Startup Innovation Award – has had a whirlwind start to Parcel+Post Expo. “This year’s show has worked out really well for us – and it’s only halfway through,” says Sandro Rabbiosi, co-founder of Nuwiel. “The members of the judging panel are influential, high-level players in the industry, so having their endorsement is an honor. It shows us that our solution is very relevant – and this has been proved by the fact that we’ve already made some new customers at the expo and have made excellent leads and contacts.”

The winning technology is an electric cargo bike trailer, which has technology that allows the trailer to move in synchronization with the bike’s motion. The trailer accelerates and brakes automatically with the bicycle, so the cyclist doesn’t make any additional effort when cycling with the trailer. “When you ride your bike, it doesn’t feel like there is even a trailer there,” says Rabbiosi. This works by using a self-regulating algorithm that helps keep the bike and trailer synchronized, even while starting and stopping.

The trailer can carry 150kg and has a volume of approximately 1.1m3. It has a one-button operation to activate the trailer’s system, and can be connected to any bicycle, cargo bike or electric bike in one second, without any tools. Disconnected from a bike, it can be used as an electric handcart inside buildings and pedestrian-only zones.

The Nuwiel trailer is being used by UPS in five German cities, and Rabbiosi says more postal companies will be announced as customers next week.