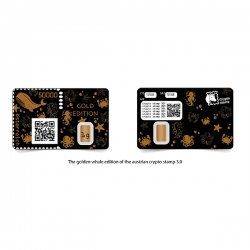 Varius asserts that its stamps not only started a new era of collecting, exchanging and trading stamps but also showcase blockchain advantages like proof of ownership, traceability, counterfeit protection and user interactivity.

In addition to the stamps’ original purpose, they became collectables and caused the emergence of a new market. Collecting and exchanging stamps became not so much a trend as a hobby and an investment for a huge community. The focus shifted from functionality to aspects like appearance and rarity. This behavior was encouraged through the release of special editions.

Nowadays, stamp collecting is experiencing a new peak due to the rise of the crypto stamp, a physical stamp with a digital twin in the blockchain. VariusSystems is proud that its customer, Austrian Post, was the first to publish crypto stamps worldwide. Since their initial release in 2019, the technology has changed and gained prevalence.

On the stamp’s activation, a color is randomly generated, defining its rarity and value. Besides this interest this has for collectors, the crypto stamp is revolutionary in terms of counterfeit protection and authenticity verification. This was achieved through the integration of an encrypted near-field communication (NFC) chip that enables a linkage between the physical stamp and the digital twin, which is secured in the blockchain. In addition to the security aspect, crypto stamps also set new standards in terms of traceability and proof of ownership. Every stamp has its own token ID, which is assigned to a specific holder, and retains time logs for every ownership transfer.

Crypto stamps have not only revolutionized the collector market but have also changed the blockchain sector. The crypto stamp is a perfect example of the combination of the physical and digital environment and showcases a simple solution to overcome the necessity to buy blockchain assets via cryptocurrencies. The wallets which hold the tokens are minted on a pre-installed wallet which is embedded in the physical product itself. This enables the post office and its user to perform an exchange using regular currencies and avoids additional transaction fees. However, the potential of blockchain has not yet been exploited by the postal industry. The digital tokens could be used as parcel trackers and can deliver more cost-effective and precise location determination than ever before.